I contacted Meredith Bolster and Peter Stowell about Elizabeth Newell Wales. Bessie married Frank Wales. Bessie was half Penobscot. She embraced her heritage when many passed as caucasian. Bessie’s brothers Thomas, Lawrence, and Sockalexis lived in Denmark. All are buried in the Wales Cemetery.

Below is our correspondence:

I research lost western Maine Indian tribes, have identified more than a dozen of them, and have put together a powerpoint presentation for historical societies, schools, etc.
Along the way, Meredith Bolster and I got connected, first through her online site, then through Facebook. She is descended from Sock Newell, I think (you meant Sockalexis Newell, didn’t you?). Anyway, she knows about him. I merely followed some online mentions of Denmark and Sock Newell. Came across a ton of Denmark Cemetery burials and found that Sock Newell’s father is buried in the Wales  Cemetery in Denmark with mostly relatives. Never knew that Denmark could have so many cemeteries.
That’s about it. Sock lived in Greenwood for decades, made craft furniture and other knick knacks for sale on the shore of North Pond. I knew of his people, having grown up in Bethel.
I would contact Meredith if I were you; feel free to start a conversation with me included in Facebook messenger if you’d like. She doesn’t have all the answers but more than I do. But I’m pretty dogged in tracking down new sources of info.
From Meredith Bolster: 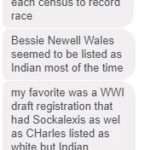 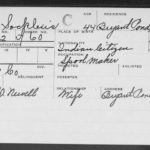